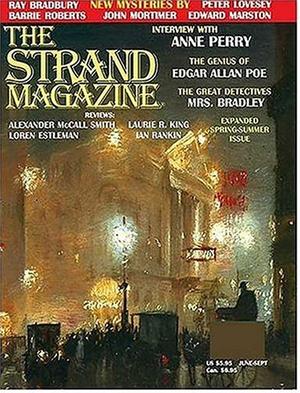 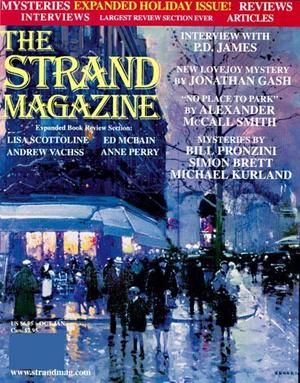 The Strand is the magazine for mystery fans, a full sized, full color glossy magazine that is published four times a year. Whether it is a story set in Victorian London - or a contemporary hardboiled story - The Strand has something for everyone. Each issue of The Strand Magazine features short stories by award-winning writers such as Alexander McCall Smith, Ray Bradbury, Ruth Rendell, Edward Hoch, Peter Lovesey, Bill Pronzini and John Mortimer, plus interviews with actors and best-selling writers such as Peter Ustinov, John Gielgud, Tony Hillerman, Dick Francis, P.D. James, Anne Perry, and Stacy Keach. The Strand has a wide array of articles from our series on "The Great Detectives" to profiles of mystery authors past and present. The Strand also publishes articles about true crimes, recent articles have included a study of the Jack the Ripper murders and an investigation into the Da Vinci code phenomenon. In addition, each issue of The Strand has at least twenty book and audiobook reviews which look at the newest releases from large as well as smaller publishers. See why the Boston Globe said, "discerning readers will enjoy knowing of this new Strand."

Shipping is always FREE at TopMags. Due to magazine subscription cycles, please allow up to 8-12 weeks after purchase for your first issue to arrive. You may not receive the exact issue depicted above, but you will receive the most recent issue of Strand once your subscription begins. The Strand cover image(s) above are the sole property of Strand, or its parent company and are for illustrative purposes only. TopMags is not officially affiliated with or endorsed by Strand.

We Recommend Pairing this Magazine With: